Another escape adventure! After having played their fantastic Locked In A Room With A Zombie experience, we had to try out their all new Trapped In A Prison Van escape game. Unfortunately this one doesn’t live up to the previously experienced standard, but first things first. 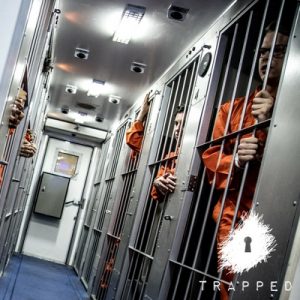 We arrived at the rather remote location on a rainy evening, which seemed to set the perfect mood. We had to wait a little for things to get prepared properly, but there’s a small waiting area inside so it wasn’t much of a problem. Once our time slot rolled around, we were greeted by our host, how somewhat clumsily introduced us to the game setting. We were all asked what crimes we committed to land in this situation, which was a nice touch, and then led outside towards the van.

After being instructed to put on our prison overalls and take our numbered badges, we were handcuffed and shackled, were given a short introduction, then one by one led into the van and locked into a tiny cell. Until now, the atmosphere was great and the setup of the game seemed perfect, but this is where it started getting a little disappointing. The individual cells were of course very small and we barely had room to sit in them. The chains connecting our handcuffs and shakles were also rather short, so especially taller players were extremely hampered in their movement options. 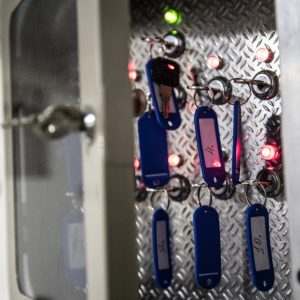 It took a long time for anything to happen in the first place, which seemed like a bit of a waste of time, then once we were able to get going, things went even more slowly. While I loved the idea of the prison van setup, it turned out to just be a hassle. The cells had to be individually opened, so one of our players spent almost 40 minutes in their cell as her key slipped out of its hiding place and right outside the van through the main door, which was of course locked. Finding the keys to unlock our cuffs and shakles also proved extremely difficult as the mechanism that held the key was hidden in a very dark corner, which made it extremely difficult to decipher the clues due to lack of lighting and clarity of the markings.

While there were a few interesting games and riddles, most of the time we were just struggling to communicate (the cell setup swallows up sound and makes it hard to hear others) and trying to squeeze past each other. There were also traps set to deliberately confuse and hinder players, as well as a regulating actor without who’s hints it would be almost impossible to put the riddles together. 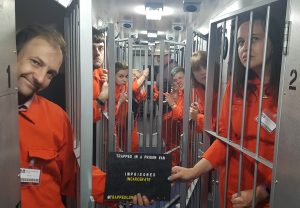 Overall, we just spent a lot of time confused or waiting for something to happen or for someone to move out of the way. As much as we loved the setting, the execution is seriously lacking. Not sure I’d say it’s worth travelling all the way out to Greenwich to play this one.

It only gets two and a half out of six rainbow sloths from me, losing more points for sending incessant emails demanding Tripadvisor reviews.