I had a chance to see Fantastic Mr Fox at the Lyric Theatre, and it was a beautiful evening! But let’s start at the beginning. 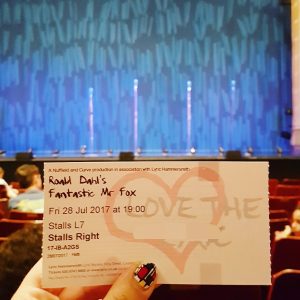 Roald Dahl’s colourful tale of friendship lends itself perfectly for a raucous live show. While it’s quite dark at times, it’s a delightful story and a fantastic stage production.

The costumes and stage design are bright, colourful and whimsical, and the entire cast gave their all to make this musical into what it is. From the melodic birds to the self-possessed titular Mr Fox, all characters get a musical treatment that works brilliantly for their characteristics. The three villains, farmers Boggis, Bunce and Beans, are suitably grim, almost mafia-style, in attire and especially Richard Atwill as Beans shows off his booming voice.

Kelly Jackson, who plays Mouse, has the most adorable squeakiest little mousey voice and Sandy Foster makes her Rabbit persona so very surreptitiously raunchy, it’s a delight to watch. The young Jade Croot, as Kit, is especially impressive in her strong acting. 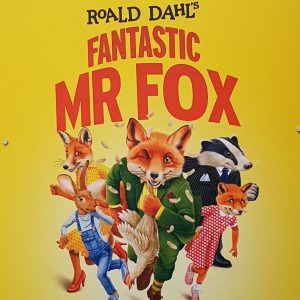 Catching tunes, enthusiastic dancing, brilliant stage design, fantastic cast, all of this plays together to make a perfect children’s theatre experience. Five and a half out of six rainbow sloths!