The poster for this production struck a chord in me and I had to buy tickets. This play is really quite something! Terror will challenge your moral code and get you talking. 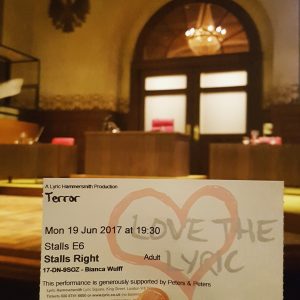 The basic setting of this gripping tale is a German court room, a fighter pilot is standing trial accused of murder after he ignored clear instructions from his superiors and shot down a hijacked passanger airplane. There are many more details to the story that are played out in courthouse style with the audience being addressed as lay judges.

After every detail is explained, both defence and prosecution lay out their closing statements, and the judge explains the procedure, there is a short interval before the audience gets to decide the end of the play by voting guilty or not guilty.

This set up is really interesting and intense and shows very clearly where your own moral code is defined. It’s a great discussion starter and really well done. We ended up having a really close vote, with 121 voting guilty and 129 not guilty. 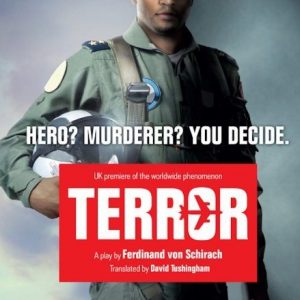 Checking the Lyric’s social media accounts, the not guilty verdict seems to be the generally decided upon outcome, but usually with a stronger majority. This result was very surprising to me as I had assumed a guilty verdict would have been favoured after all the incriminating details were layed out.

This performance was certainly different and unusual, very professionally done and presented, and most of all very thought provoking. I’m rating this play four and a half out of six rainbow sloths.