This ImmerCity event, organised through Love Popups London, sounded like an amazing murder mystery, so we had to try it out! Here’s how they advertised it on the event page:

A psychologically thrilling immersive mystery awaits you deep under the streets of London, in the basement of an old abandoned rug factory.

In 1983 the era of punk, during a particularly riotous party at his home in the derelict building, Rusty disappeared.

33 years since the event, a body has been uncovered. Jack, an ageing rock star and actor has come under suspicion, in order to protect his public image and clear his name he has hired a rather unusual individual to help, whose expertise is “resurrecting” forgotten things.
Jack invites you to become part of the story, bringing you back to that night, the last time Rusty was seen alive.

Unlock secrets, expose lies, and try to seek the truth about what really happened. 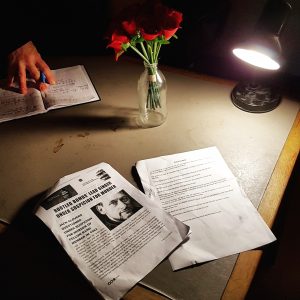 Now, I really enjoyed the basic idea behind this and the location was absolutely perfect for this, but it didn’t quite live up to my expectations. More on that later though, let’s start at the start!

After arriving we were sorted into groups and given a basic rundown of events to follow; but most importantly, we carefully read through all the information provided, which was a lot. We were then given individual tasks and led into a short presentation, a ghostly projection of the events of 33 years ago. It was very well done and super immersive, absolutely loved that part of it as it was so well done.

After the first observations, the event went a bit downhill though. Things became convoluted, team members would have had to update each other on their individual observations of separate part of the presentation, but obviously it’s easy to miss details in these descriptions or just not get the full picture of every separate event.

I felt we weren’t given quite enough time to discuss our findings or our strategy before being pushed into the next part, personal talks with the “ghosts”. Granted, we were the first team to be sent downstairs while everyone was still discussing, so that skewed things a bit. 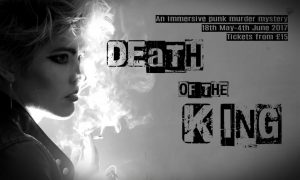 The personal talks with the ghosts were where this immersive story falls apart. It stays immersive and interactive throughout, but as the protagonists are acting independently in character, some of our experiences were a bit iffy.

Our group wasn’t supposed to split up, so we had seven people talking to one character at a time, which clearly doesn’t work logistically. So, you have a bunch of people twiddling their thumbs and not hearing a thing while others struggled to strike up a conversation with a variety of different personalities; this led to confusion, frustration and even personal attacks at times when a character didn’t like the way someone sounded. I’ve been to murder mysteries before, but usually there’s a set of rules of how characters interact or speak with participants.

By the time we had finished with three characters, other groups had split up and blocked us from speaking to the ones we needed to speak to. It was all a big mess.

Eventually we were pulled out and immediately required to give our result without having a chance to discuss our findings within the team or come to conclusions. We happened to find the correct solution, but some team members were still confused at the end of it all.

While the theory of this event has a lot of potential, the execution leaves a lot to be desired. I can only give three out of six rainbow sloths for this event.