I had been waiting for months to see Woyzeck at the Old Vic. Georg Büchner’s unfinished play is such a visceral, interesting portrait of struggle, I was quite excited to see Jack Thorne’s new, modernised interpretation. Unfortunately it didn’t quite live up to my excitement. 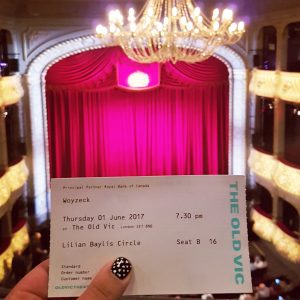 The story is transformed and modernised to show the struggle of a young British soldier in divided Berlin in 1981, weathering pressures from his domestic partner, who demands a better life for herself and their baby while making no attempts to pitch in, his superiors and his colleagues. On top of all that he signs up for medical trials to earn extra money, the trials seem to be for psychotropic drugs as Woyzeck spirals out of control more and more after each dose.

The mounting pressures result in angry outbursts, which are genuinely scary and completely out of the blue, that get worse and worse each time.

The impressive stage design does a perfect job at setting the scene with large dividing walls that move about the stage to dreary and dramatic music, gory wounds disfiguring more and more of the wall sections as the play progresses.

While most actors do a fantastic job and deliver believable performances, especially John Boyega, who delivers a heartfelt descent into madness that only falls apart in the last ten minutes in which he can only portray his frustration through repeatedly slapping his own head, there are quite a few issues with this production though. Firstly, the sex of the baby keeps randomly changing, this doesn’t seem to serve any kind of purpose to the plot and just seems a really bizarre choice.

Secondly, the doctor who conducts the medication trials is supposed to be German and holds a rousing speach, seemingly at a large medical convention, entirely in German. Now, German is my mother tongue, but I understood maybe every tenth word of this speach. Why does it seem so impossible to cast someone from the actual country the character is supposed to be from? This is London. We’re not exactly short on actual Germans here.

Apart from those minor niggles, I do have two very major ones. Marie, played beautifully by Sarah Greene, seems extremely inconsistent. One minute she piles pressure onto Woyzeck and demands he provide better for her and the baby, the next she refuses to help in any way herself, just to flip back to pressuring her partner to do better, eventually completely changing her mind again and deciding to go back to Ireland to work and make money. Her erratic behaviour seems to point a finger at Marie and almost blames her for Woyzeck losing his temper.

And to Woyzeck himself, yes, Boyega plays the role powerfully with passion, but it seems to play into the incredibly racist narrative of the predatory black man violating a white girl. This is exacerbated by the fact that, aside from one minor ensemble character, Boyega is the only person of colour on stage. Had Woyzeck and Marie been cast with switched races, or simply more actors of colour cast, this wouldn’t seem quite such an overtly racist statement as it unfortunately does. 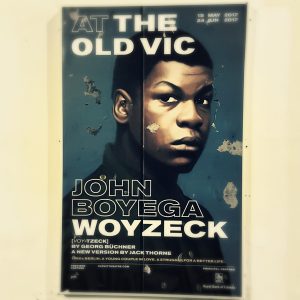 Overall it was a very good production and the stage and sound design are absolutely, hauntingly top notch! But the changes and additions to the plot seem one-dimensional and short sighted. I’d love to rate it higher, but feel I can only give it three out of six rainbow sloths.