On Friday I went along to see Obsession at the Barbican, the new interpretation of the 1943 film by Luchino Visconti. Directed by Ivo van Hove and starring Jude Law and Halina Reijn, it was promising to be an interesting evening.

Right off the bat, the size of the stage as well as the simplicity of the stage design struck me, vast wood panelled floors creating open spaces, dark bare walls framing the brightly backlit space, with very few items on the stage; the design created an atmosphere of desolation, tension and intrigu before the play even started. 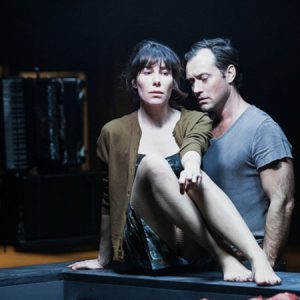 An accordion, suspended in mid-air, provided gently flowing music and two of the central characters, young Hanna and her older husband Guiseppe, were milling about the stage while the audience shuffled in.

Gino, a handsome drifter played by Law, enters the stage while playing a haunting tune on his harmonica, sauntering in leisurely and immediately veers towards Hanna; the young pair’s mutual obsession turns into an affair, which turns into murderous plans to get rid of Guiseppe, but doesn’t head towards a happy ending for anyone involved.

Every movement of the actors seems powerful and calculated, painting the scenery and setting with actions and emotions rather than props or backdrops. Abstract in its simplicity and intoxicating in its symbolism, it’s an impressive artistic display, paring the story down to its bare bones, providing the audience cues to fill in the gaps and let their minds provide the scenery. 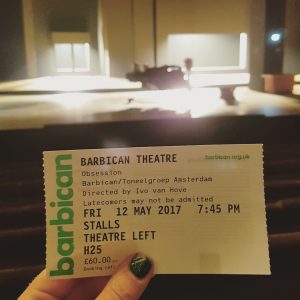 I absolutely loved the play and the intense ending was made even more impressive by unexpectedly featuring the only largr backdrop installation of the entire play. Such a stimulating and deeply touching way to present a story!

I’m rating this one five and a half out of six rainbow sloths!