I was lucky to snap up a preview slot with Adventox, a new escape game company in Shepherd’s Bush. They’re in a super convenient location, which is rare for this type of company, often warehouses, industrial areas, or large spaces in office buildings are used for escape games; Adventox have found a beautiful, slick space inside a shopping centre with a large window front entrance area. They did not cover up these windows but are utilizing them to create an airy, open waiting area that’s bright and comfortable. I’m sure it also brings them foot traffic as people walking by can see groups waiting and being briefed. 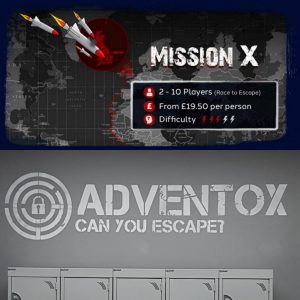 We first tackled Mission X, which sees your team racing against time to stop a missile attack on London. The briefing is done by a quick run-through of the usual escape game rules as well as an introductory video, which is quite well done! I do like video introductions to the theme, sometimes they do end up being on the lengthy side, but the Mission X one is quite straight forward and just the right length.

Upon entering the first room, we immediately noticed that this one is a little different than most games of the same type. The riddles and clues weren’t as standard, there were a lot of original ideas and puzzles I’ve never seen in the same way. Evidently we weren’t prepared for that as we got stuck a few times, too focused on what we were used to and not thinking out of the box enough.

There closer you get to disabling the missile, the more exciting the game gets, with quite a few nerve wracking and thrilling effects. Some of the props were still a little provisionary, but as this was a preview game, I trust that will be fixed in time. Most props and decorations were very well done though I could see some areas were people may be tempted to use brute force to try to hack their way into or out of items. Don’t. You don’t need to. You do, however, need to keep your mind open and think outside of the standard escape room tropes as this one really has some twists to it, and connections between puzzles and clues aren’t always obvious as there is no set storyline or thread to help you along. 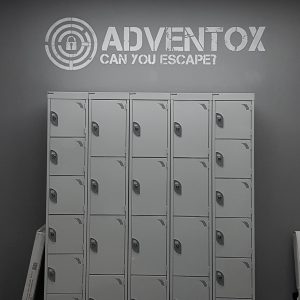 We did stop the missile in time and enjoyed the game, but it was a mad scramble to figure out what clues and codes were to be used with which locks and riddles, so I’m taking off some points for that.

Overall, it’s a really fun room with fresh new ideas. I’m rating this one four and a half out of six rainbow sloths.

My review of the second room at Adventox can be found here: Adventox – Alcatraz