When I visited my mother for her birthday, I wanted to take her to a musical as we’re both big fans of musicals in general. I chose this one as it is about a local Hamburg icon who my mum once met in her youth and kept telling the story of the bizarre meeting when I was younger. I thought it would be a fun evening, but boy was I wrong. Let’s start at thr beginning though. 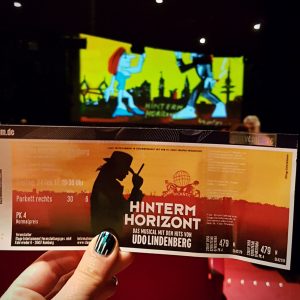 Udo Lindenberg started making huge waves in Germany in the early 70s with his quirky performances and unusually blunt lyrics. His career took dips like most long-term success stories, but he’s still widely known and reasonably successful today. However, the musical makers chose to focus on one song, Mädchen Aus Ostberlin (girl from east Berlin), which wasn’t even that huge a hit back in the 70s, and added a bit of story from the 1983 Sonderzug Nach Pankow (special train to Pankow) which was a social and political commentary on East Germany as a reaction to being prohibited from entering the country for a concert performance. The latter made a huge splash all over the media as few artists made such blunt statements about East Germany, but the choice to focus a musical about a musical sensation from Hamburg (which is in northern Germany, which has always been part of West Germany and had little to do with the East) on the story of a girl from East Berlin, the struggles of people from East Germany, the fall of the wall and an unreasonably soppy lovestory (for a rock musician who is known for his excesses and has never been married nor in public relationships) seems like quite the reach.

While the actors were all giving their best and especially the one who played Udo was spot on in voice and movement, the performance was lacklustre and silly, the story boring and predictable from the start. The lovestory was completely insanely unbelievable and tediously boring at the same time, every event foreshadowed quite bluntly. The residents and especially the officials from the East were nothing but caricatures, screaming and stomping around for no reason.

The last five minutes or so, when the lobby of the Hotel Atlantic (the long standing residence of Udo Lindenberg) was filled with colourful local characters and a medley of Udo’s hits was sung, it finally started to be fun and appropriate for the artist. But those few minutes couldn’t make up for the bizarre rest of the musical. 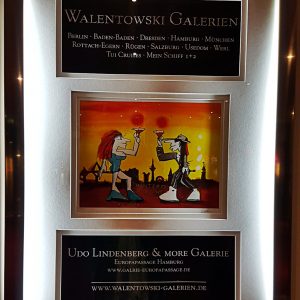 From what I’ve read, the artist himself was involved in the making of this musical, which is horrifying when you see how terribly bad it is, but speaks to his state of mind I suppose. Even a two hour show of nothing but drag queens singing his biggest hits would have made for a far better storyline than what was presented. And would have been worth seeing at least.

Avoid this one, it’s terrible. One rainbow sloth rating, and that’s only because the actors did the best they could with this mess of a show.