The Jermyn Street Theatre is one of those London locations that’s well known and well hidden. It’s a small theatre on Jermyn Street, just one small room with a few rows of seats.

I heard about The Twentieth Century Way from an acquaintance and had to check it out myself. It’s a play about gay men in the 20s in America and sounded very interesting. 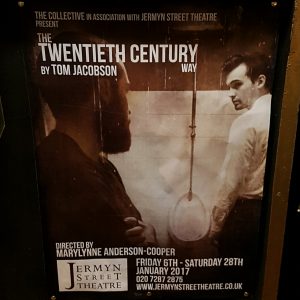 With just two actors and a very small stage, all of the impact had to be portrayed through words and gestures, and it worked so very well! The subtle undertones and internal struggles were not lost on the audience.

The play centers around two actors, who show up for an audition but are left waiting. To entertain and challenge themselves, they start assuming different roles, led by the more seasoned Warren, who immediately puts the younger and inexperienced Brown on edge.

They cycle through a barrage of characters with the help of costumes and props but mostly through posture and voices. Warren gives Brown acting tips, but the younger actor quickly learns to reverse power structures and through this back and forth they give insight into the struggles of gay men in a prohibitive and dangerous society that has criminalised their very existance. 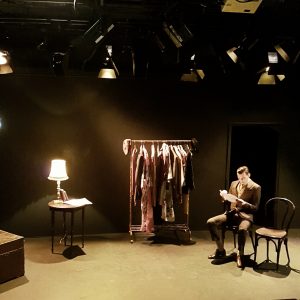 The passion and adaptability of the performers absolutely convinces and the harrowing undertones of opression and fear make this play an absolute stunner.

I really enjoyed this intese yet subtle performance that needed absolutely no nudity or overt sexuality to portray the attraction between the actors.

I’m rating The Twentieth Century Way four and a half rainbow sloths!