A friend of mine organised a group of us to go to the previews of the new Bunga Bunga location in Covent Garden, I just couldn’t miss this! It was advertised as an immersive mafia wedding theme with a set menu for food. 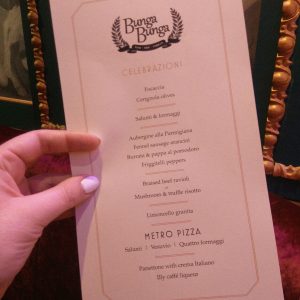 When we arrived, we were seated at the bar area for a warm-up drink before heading downstairs when our booked time slot came up. We were led down the stairs and through a corridor decorated with blood splatters, a wrapped up thing hanging from a butchers hook which looked like a body covered with linen, complete with a mafia minion making up stammered excuses. It looked to be the start of a great immersive experience, but unfortunately the great beginning didn’t carry through the evening.

After escaping from the corridor with promises of never speaking of what we saw, we were greeted by a young woman in costume, asking us whether we were with the bride or groom and subsequently leading us to the party hall where the wedding pair greeted us like old friends. We were shown to our table and our host explained the set menu to us.

While I do like set menu options, this one had several alcoholic items listed. As I don’t like alcohol, I asked whether non-alcoholic substitutes were available and was bluntly told I could either just get over it and have those items because there wasn’t much alcohol in them at all, or I could simply skip them. A bit miffed, I asked whether at least non-alcoholic cocktails were available and was againg told by our host, with a stern stare down her nose, that I could just buy the high priced alcoholic cocktails and the bar staff would make something up for me. This was so rude and flippant, I decided to stick to water for the rest of the night. It’s really not much to ask for non-alcoholic options, but to be treated like a pariah because of this simple request is a bit much.

Food wise, there was a bread and olive selection available on the table and the first taster course of salumi & fromaggi, a selection of cold cuts and cheeses, was delicious and there was ample food provided for everyone at the table. 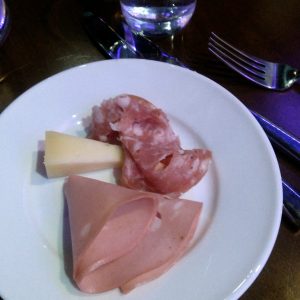 Within minutes, the entertainment started. It was a lot more Vaudeville variety show than mafia wedding, which was fine with me! Our singer was extremely sassy and fun! There was also a magician who did private shows for individual tables, but it took him quite a while to get to us. 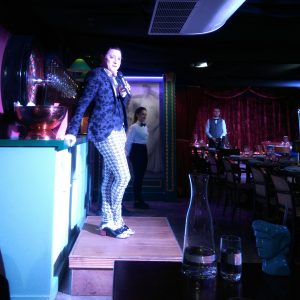 Next up, another mixed appetizer course, this time with aubergine alla parmigiana, fennel sausage arancini, burrata and pappa al pomodoro, and friggitelli peppers. The aubergine was amazing, so was the burrata! Juicy and flavourful. The fennel sausage arancini were a little bland and the peppers just terribly bitter and chewy, not my thing at all. 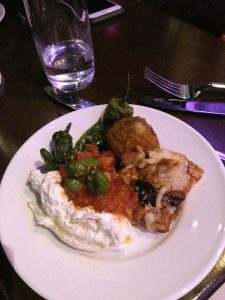 Every half hour or so, everything stopped and all staff participated in a terribly cheese Bunga Bunga dance. I thought this was way too gaudy and over the top, but others in our group enjoyed it a lot.

Our first main course was braised beef ravioli, which were a bit watery and soggy, quite disappointing. 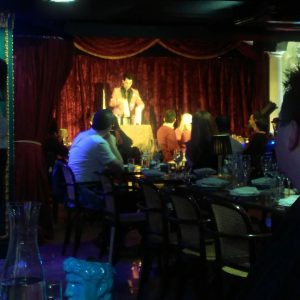 The metro pizza more than made up for it though! Large pizzas with lots of different toppings. Crunchy crust, gooey cheese, fruity tomato sauce, fantastic! And there was so much of it!

We finally got our private magic performance and there were acrobats to watch as well. The entertainment was quite good, but didn’t seem to go with the theme much at all. The wedding couple just stood by the door to greet people coming in, there weren’t any other discernible mafia wedding elements, so it definitely wasn’t the immersive experience I expected.

The dessert course, panettone with crema Italiano, was very average. The cake was dry and the crema sauce smelled of urine and tasted awful, so no one at the table used it.

We did have a short chat with the manager and he was fantastic, he did us a favour that we swore never to tell anyone about, so shhhh, it’s a secret!

Overall, I was a bit disappointed that the theme wasn’t quite as immersive as I had hoped, the entertainment was on the cheesy side but quite good and in balance, the food was just average. So I’m rating this one three out of six rainbow sloths.